The NSW Government is pursuing a “Local Government Reform” process they are calling “Fit For The Future“. Although it started as a holistic look at methods to improve local government sustainability into the future, it has descended into a one way train to COERCE and/or FORCE Councils to AMALGAMATE into huge “MEGA-COUNCILS” of 250,000+ people.

For North Shore Councils – it is proposed that 6 previously separate local government areas (including Hunters Hill) are combined into one mega-council based out of North Sydney. 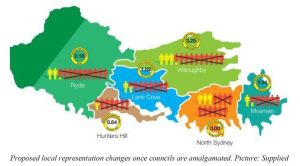 This proposal  completely changes the “face” of local government by drastically reducing local representation, so that local government will no longer be “local”, and in fact will become become a “faceless” regional bureaucracy.

It is being touted by the Government as “necessary reform” of benefit to deliver costs savings – however, this is an economic rationalists approach to ‘reform” that completely ignores the value of local representation to a community, and the function of local government to represent and serve the LOCAL community.

What they are not talking about is;

a) the huge price that local communities will pay when they loose their voice, their local representation, and control over development decisions that affect their local area.

b) that both the policy and the process that they are pursuing has been roundly condemned by leading experts in local government reform, a full parliamentary inquiry and the local government sector.  The process has been declared to be “flawed”,  and, it is claimed, projected benefits are being over stated, and significant costs have been ignored. (See “Fit For The Future Flawed” here.)

The proposed mergers will have a profound negative impact on residents in Hunters Hill, which currently has a population of 15,000 people served by 7 local councillors. It will completely change the face of local government for our community, such that it is no longer “local”. With less than one representative from our local area on such a mega-new council, based far-away in North Sydney our local community will completely loose it’s Voice and its Say over decisions that affect our local area.

THIS THREAT PUTS AT RISK: 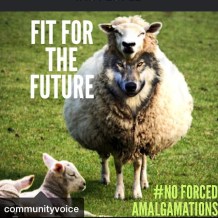 1: OUR LOCAL DEMOCRACY and REPRESENTATION
2: OUR VOICE AND SAY OVER LOCAL DECISIONS
3: OUR CONTROL OVER PLANNING and DEVELOPMENT in our area.
4: OUR Unique HERITAGE and CHARACTER
5: OUR LOCAL IDENTITY AND SENSE OF LOCAL COMMUNITY. 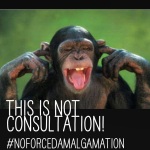 The Government says it is “consulting” with councils, but it is NOT LISTENING: Not to councils, nor to their local communities, nor to the advice of experts, nor to the Local Government sector, nor to to the recommendations and advice of the Parliamentary Upper House Inquiry. Instead it is blundering on regardless. In fact, most recently it has taken to bullying and intimidatory behaviour with threatening letters to councillors intimating that they must agree to “voluntary” mergers or they will face the sack.

The FIT FOR THE FUTURE – State Government Mega-Amalgamation agenda poses a threat to ALL ‪Local Communities‬ in NSW!!  It threatens to devour local grass roots democracy and the #Voice of the Local Communities.

We urge people to get informed and understand what is at stake to be lost.
THE THREAT IS IMMINENT  and ACTION IS URGENT. Please join OUR CAMPAIGN to preserve local democracy and the heritage and character of Hunters Hill.

Next – “Fit for The Future”