Details of this meeting can be found below. Of note: Clr Meredith Sheil has written a brilliant appraisal dated 14 December of the meeting between Mayor Richard Quinn and herself, and Premier Baird. It can be found on facebook here and as a pdf  here:

This is a must read. The article graphically exposes the many inadequacies of the Premier on this issue – his lack of understanding of Hunters Hill and its community, and of its history and council. But it is much more than this. He thinks that councils are just like businesses. Wrong. He thinks that our heritage can be protected in a mega council, but can’t explain how with minimum representation. He thinks that bigger is automatically better, but can’t explain how small councils are sustainable and big ones aren’t. He appears to have in fact what we all suspected – no real understanding of how communities and local councils actually work. A very sobering expose indeed.

We met with our Federal local member Trent Zimmerman MP on 12 December. It was a constructive meeting and he expressed his view that Hunters Hill should remain as an independent council. In an interview with The Weekly Times reported 14 December he states “the Orange by-election result should be a wake-up call for Premier Baird and his cabinet to call off the forced amalgamations of local councils. Hunters Hill Council has represented its community for over 150 years and should stay” – see here: socc-liberal-mp-trent-zimmerman-supports-local-councils-twt-14-dec-16

Anthony is not responding to our emails or letters. It seems apparent from Meredith’s meeting with Baird, that the Premier knows very little about Hunters Hill and its community. It appears that Anthony Roberts has never made representation on our behalf to the Premier and Cabinet, never informed them about this Municipality, its history and significance. He is refusing to speak up for Hunters Hill in the public arena. He is not representing this community in any way – publicly or within his Party. He is a disgrace and should resign. It is interesting to compare his performance with Trent Zimmerman who is speaking out and calling it as it is.

The Baird Government is falling apart over forced amalgamations. It is deeply unpopular, it has lost a Deputy Premier, the leader of the National Party and his deputy over this issue. Baird is losing this battle and will probably be next to go.

The last SHHMC Report ‘A Call for Action’ 11 Dec 16 can be found here:

Don’t forget to contact the local State member Mr Roberts, by email or letter or directly – and let him know exactly how you feel.

Again many thanks for your ongoing support and have an enjoyable Christmas and New Year.

Following a direct request by Clr Meredith Sheil put to Mike Baird at the Local Government Conference in Wollongong, Hunters Hill Council  was promised a meeting to discuss the forced merger of Hunters Hill with Lane Cove and Ryde Councils, including Hunters Hills opposition to this process, the damage being wrought and an alternative way forward.

Minutes from the meeting are published here – in a Mayoral Minute

and also reported in the press:

Today Dec 7 2016 – Save Our Council Coalition has sent an email and letters to NSW Government MPs – SUMMARISING OPPOSITION AND CALLING FOR REPEAL OF FORCED MERGERS.

Save Hunters Hill Municipality Coalition  has also send a letter to our local member Anthony Roberts MP calling for stronger action, and better local representation to support out community in it’s fight against forced merger with Lane Cove and Ryde. 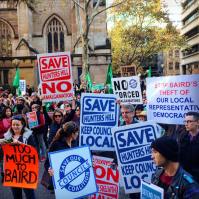 SOCC ORANGE BY-ELECTION SUMMARY REPORT – FORCED MERGERS THE ISSUE AT THE CORE OF THE COLLAPSE IN SUPPORT FOR BAIRD GOVERNMENT.

A massive swing has seen the National Party lose the previous safe seat of Orange. The swing, of up to 60% in merger affected booths was historic in by-election history. This represents a massive and emphatic rejection of the Baird / Grant Government’s forced merger agenda.

The leader Troy Grant and Deputy Adrian Picoli have stood down.

Save Hunters’ Hill Municipality has called for a withdrawal of all ongoing forced merger proposals across NSW and for Paul Toole, National Party member and Minister for local Government to stand down as well.