PROTEST MARCH AGAINST MIKE BAIRD May 29 2015

“The people you are going to hear from today don’t have much in common on the face of it.. – but all these different people.. have a powerful thing in common – the actions of Mike Baird’s State Government have made them sit up and take notice, and ask, “Whose city is this? Whose State is this?”  It doesn’t matter what your issue is – whether it’s Westconnex ruining your community, or your local council getting sacked, or the lock-outs gutting Sydney’s night life, or the CSG and mining companies ruining the environment, … or the police getting powers to  jail protesters, or pensioners in Millers Point getting kicked out of their houses, or the indigenous artefacts and fig trees they are bulldozing over in Randwick , or privatisation of disability services,… or  Tafe getting gutted.., or the great monstrosity of a casino going up on public land.. or the womens’ shelters that have had to shut.. Instead of the government this state and this city deserves we are run instead by  a group of the most morally bankrupt, casually authoritarian, religious fundamentalist, ethically compromised, unapologetically mediocre bunch of xs you can imagine – Mike Baird; Troy Grant; Duncan Gay; Andrew Scipione.. – people so devoid of imagination.. that the only use they can think of, for the immense power  given them is not to make vulnerable peoples lives better, or pursue a vision of what this state could be, but to act as errand boys for the rich and the powerful.. to rubber stamp financially ruinous, environmentally disastrous mega-projects whose only purpose is to flare the vanity of their financiers, to allow one of the greatest cities on earth to be turned into a concrete graveyard in exchange for cheques to party head office every election year, and who inscribe their bigotries and natural prejudices into law in their spare time.  It doesn’t matter what your issue is, at some point you will ask yourself the same question..- “Whose city is this? Whose State is this?” .. You look around, you have your answer – because the truth is at the moment we do not run this city, we don’t run this state –  this government doesn’t work for the people who voted for it – it works for the corporations that pay for it  –  mining and CSG companies, property tycoons, gambling establishments, corporate creditors… We are living in a state where the Premier and our own government regard us with a mixture of fear and contempt – a government so terrified of its own people that it makes  protest illegal, bans any form of democracy it finds inconvenient, and equips a politicised and militarised police force with any power necessary to enforce it’s agenda. This isn’t a question of conflicting ideas, this isn’t a question of political differences, this is about whether we live in a democracy or just the appearance of one.  When you march on State Parliament today remember, the only thing more potent than their contempt for you, is their fear of you. They know their power is predicated on your apathy, on your weariness, on your willingness to throw up your hands and say “it’s all too hard, I can’t fight anymore.” But if we are smart, if we are engaged, if we are informed, if we are angry and persistent, their days are numbered…  They are no match for us, and they are about to learn that… Let’s march on State parliament, let’s take our city back, let’s take our State back, let’s take our democracy back – are you with me? 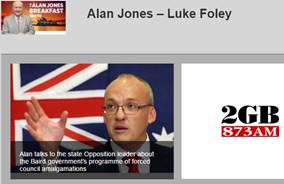 Major backlash over council mergers (video)
PRIME7 May 12, 2016 – Local Council amalgamation D-Day has arrived, and the news is not good for small councils who fought to stand alone.
Gundagai Council’s mayor has labelled the State Government’s decision a farce, as councillors process the news they’re out of a job.

Ten Eyewitness News 12 May 2016
The state government has confirmed controversial council mergers, as protesters against the plans call for the premier to go

LAUNCH OF SAVE OUR COUNCILS FEDERAL ELECTION “NO-FORCED AMALGAMATION” CAMPAIGN  – With “Pledge for Local Democracy” for candidates to sign to demonstrate the commitment of their party to oppose forced amalgamations.

GUN TO THE HEAD OF COUNCILLORS

Phil Jenkyn AOM – Save Our Councils / Save Hunters Hill Municipality

The Baird Government – The Liberal/National Party – is breaching basic democratic principles on many issues.  Destroying or damaging democratic institutions including local councils – Failing to respect and listen to the will of the people – Deliberately lying to and deceiving the public – Ignoring or downplaying social, environmental and heritage issues – Favouring development at any cost over legitimate community concerns and needs.

We all get to vote – None of us are going away – People power will prevail!

Baird’s arrogance is leading to a citizens revolt across this State.

We are not going to be bulldozed by an arrogant out of touch State Government.

This fight is bringing together people across the political spectrum. People don’t want their councils forcibly merged. They are telling Premier Baird – stop bullying us.

Local communities should be allowed to decide their own fate.

This will become an issue for the Federal Election. 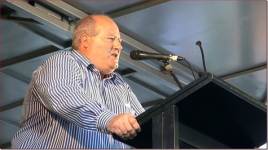 Why is Mike Baird running from the community on this issue?

He knows the people do not want forced council amalgamations. He doesn’t care what the people think.

A leader who doesn’t care what the community thinks has lost the right to govern. We should be talking today about sacking Baird not sacking the councils.

If the Liberal Party doesn’t drop this affront to democracy that is forced council amalgamations we will be out campaigning during the Federal Election.

Mike Baird does not care about local communities.